When you book with an account, you will be able to track your payment status, track the confirmation and you can also rate the tour after you finished the tour.
Sign Up

Or Continue As Guest

When you book with an account, you will be able to track your payment status, track the confirmation and you can also rate the tour after you finished the tour.
Sign Up
5792

Why Book With Us?

Do not hesitage to give us a call. We are an expert team and we are happy to talk to you.

Rose Tour The Professional Tour guide and driver pick you up from your Hotel by 9.30 between 10 in the Morning.Then visit Göreme Panorama then Pigeon Valley.After Onyx demostration.Drive to Ozkonak Underground City and Hikking Rose Valley and Çavuşin old Ottomans Settlemens.

Cavusin Village, The current village of Cavusin is located on the road. Old Cavusin, with its rock-cut dwellings and stone houses, had several hermitages. The two most important churches in Cavusin are the Great Basilica dedicated to St. John the Baptist (located on the cliff above the village) and Cavusin Church or the “Great Pigeon House” commemorating a visit of the famous Cappadocian Emperor Nicephorus Phocas. The beautiful and elegantly carved facades of the houses of old Cavusin furnish evidence of how impressive the village once was

Pigeon Valley is famous in Cappadocia due to all the small pigeon dwellings that are carved into rockfaces.earned its name from the countless man made dovecotes (Pigeon Houses) that have been carved into the soft volcanic tuff. Since ancient times Pigeons have been used in the Cappadocia region for food and fertiliser for the infertile soil. While pigeons no longer play such an important role in the area, their rocky homes have still been maintained by locals and can be found atop rock pillars and inside excavated cave houses and churches throughout the region, however, they are particularly numerous in this valley.

Ozkonak is located 14 kilometres from Avanos and was discovered in 1972 by a local farmer. This farmer, Latif Acar discovered the underground city when he notices water going missing. The complex is made up of 10 floors, at a depth of 40 metres and it is thought it could house up to 60,000 people. Only four floors are open to the public now. The larger areas of the city are connected by tunnels, however, Ozkonak also had a system of pipes connecting each level, to allow communication in times of hiding. There are also holes above the tunnels used for dumping hot oil on the enemies.

The Rose Valley is an isolated valley behind Urgup. It has beautiful rock formations with some great hidden rock – carved churches. The most interesting part of this area is the countless tracks connecting the small villages and towns through vineyards and gardens like a spider net. It is always possible to see villagers working in the area and offering grapes, apples or apricots to you.

One of the oldest settlements in the area, Cavusin is situated 2km from Goreme, on the Goreme – Avanos road. The Church of St. John the Baptist offers a panoramic view of the village. This church and its paintings date back to the 5th century, making it the oldest church in the region. It have a large courtyard which is unusual for Cappadocia. 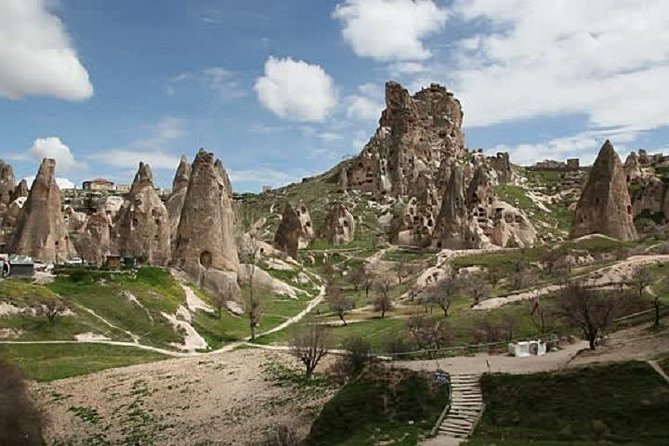 From$60
0
20 travellers are considering this tour right now!